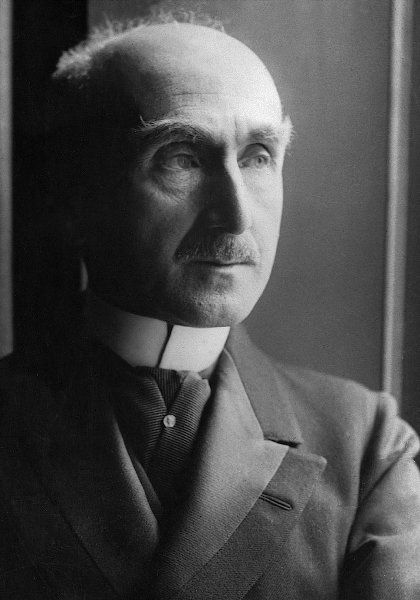 Everything is obscure in the idea of creation if we think of things which are created and a thing which creates, as we habitually do, as the understanding cannot help doing. It is natural to our intellect, whose function is essentially practical, made to present to us things and states rather than changes and acts. But things and states are only views, taken by our mind, of becoming. There are no things, there are only actions.

More particularly, if I consider the world in which we live, I find that the automatic and strictly determined evolution of this well-knit whole is action which is unmaking itself, and that the unforeseen forms which life cuts out in it, forms capable of being themselves prolonged into unforeseen movements, represent the action that is making itself.

Now, I have every reason to believe that the other worlds are analogous to ours, that things happen there in the same way. And I know they were not all constructed at the same time, since observation shows me, even to-day, nebulae in course of concentration. Now, if the same kind of action is going on everywhere, whether it is that which is unmaking itself or whether it is that which is striving to remake itself, I simply express this probable similitude when I speak of a centre from which worlds shoot out like rockets in a fireworks display—provided, however, that I do not present this centre as a thing, but as a continuity of shooting out.

God thus defined, has nothing of the already made; He is unceasing life, action, freedom. Creation, so conceived, is not a mystery; we experience it in ourselves when we act freely. That new things can join things already existing is absurd, no doubt, since the thing results from a solidification performed by our understanding, and there are never any things other than those that the understanding has thus constituted. To speak of things creating themselves would therefore amount to saying that the understanding presents to itself more than it presents to itself—a self-contradictory affirmation, an empty and vain idea. But that action increases as it goes on, that it creates in the measure of its advance, is what each of us finds when he watches himself act. Things are constituted by the instantaneous cut which the understanding practices, at a given moment, on a flux of this kind, and what is mysterious when we compare the cuts together becomes clear when we relate them to the flux. Indeed, the modalities of creative action, in so far as it is still going on in the organization of living forms, are much simplified when they are taken in this way. Before the complexity of an organism and the practically infinite multitude of interwoven analyses and syntheses it presupposes, our understanding recoils disconcerted. That the simple play of physical and chemical forces, left to themselves, should have worked this marvel, we find hard to believe. And if it is a profound science which is at work, how are we to understand the influence exercised on this matter without form by this form without matter? But the difficulty arises from this, that we represent statically ready-made material particles juxtaposed to one another, and, also statically, an external cause which plasters upon them a skilfully contrived organization. In reality, life is a movement, materiality is the inverse movement, and each of these two movements is simple, the matter which forms a world being an undivided flux, and undivided also the life that runs through it, cutting out in it living beings all along its track. Of these two currents the second runs counter to the first, but the first obtains, all the same, something from the second. There results between them a modus vivendi, which is organization. This organization takes, for our senses and for our intellect, the form of parts entirely external to other parts in space and in time. Not only do we shut our eyes to the unity of the impulse which, passing through generations, links individuals with individuals, species with species, and makes of the whole series of the living one single immense wave flowing over matter, but each individual itself seems to us as an aggregate, aggregate of molecules and aggregate of facts. The reason of this lies in the structure of our intellect, which is formed to act on matter from without, and which succeeds by making, in the flux of the real, instantaneous cuts, each of which becomes, in its fixity, endlessly decomposable. Perceiving, in an organism, only parts external to parts, the understanding has the choice between two systems of explanation only: either to regard the infinitely complex (and thereby infinitely well-contrived) organization as a fortuitous concatenation of atoms, or to relate it to the incomprehensible influence of an external force that has grouped its elements together. But this complexity is the work of the understanding; this incomprehensibility is also its work. Let us try to see, no longer with the eyes of the intellect alone, which grasps only the already made and which looks from the outside, but with the spirit, I mean with that faculty of seeing which is immanent in the faculty of acting and which springs up, somehow, by the twisting of the will on itself, when action is turned into knowledge, like heat, so to say, into light. To movement, then, everything will be restored, and into movement everything will be resolved. Where the understanding, working on the image supposed to be fixed of the progressing action, shows us parts infinitely manifold and an order infinitely well contrived, we catch a glimpse of a simple process, an action which is making itself across an action of the same kind which is unmaking itself, like the fiery path torn by the last rocket of a fireworks display through the black cinders of the spent rockets that are falling dead.